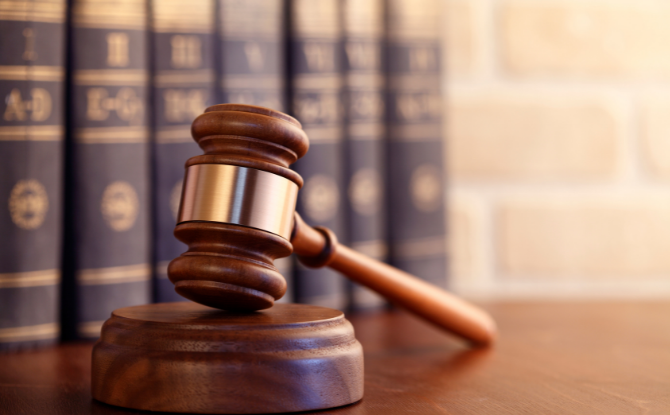 Prosecutions: 2021 summary for NSW and Victoria

Business leaders have a legislative duty to acquire and maintain up-to-date knowledge of work health and safety matters relevant to the nature of their operations.

But without any visibility of the health and safety prosecutions that have occurred, it can be hard to grasp what could go wrong within your operations.

With a little context, you have an opportunity to reflect on current practices. This can help to ensure that reasonably practicable controls have been established, and to ensure ‘like’ or ‘now foreseeable’ incidents are less likely to occur within the workplace.

‘Reasonably practicable’ means that you should consider the likelihood and degree of harm of a hazard or risk. Whilst there may not have previously been an incident at your workplace, if a significant incident has occurred across your industry, you should be aware of it.

Each year, Action OHS Consulting collates and reviews the data available from both WorkSafe Victoria and SafeWork NSW. Used effectively, this information should support you to influence key stakeholders within your organisation, and assist your business to make informed decisions with respect to their health and safety program.

The prosecution data has been collated from:

This article provides an overview of the prosecutions from 2015 through to the 2021 calendar years.

The 2021 calendar year saw a total of 96 prosecutions against the Victorian health and safety legislation, whilst in NSW the number of prosecutions was 52 [up to September 2021]. 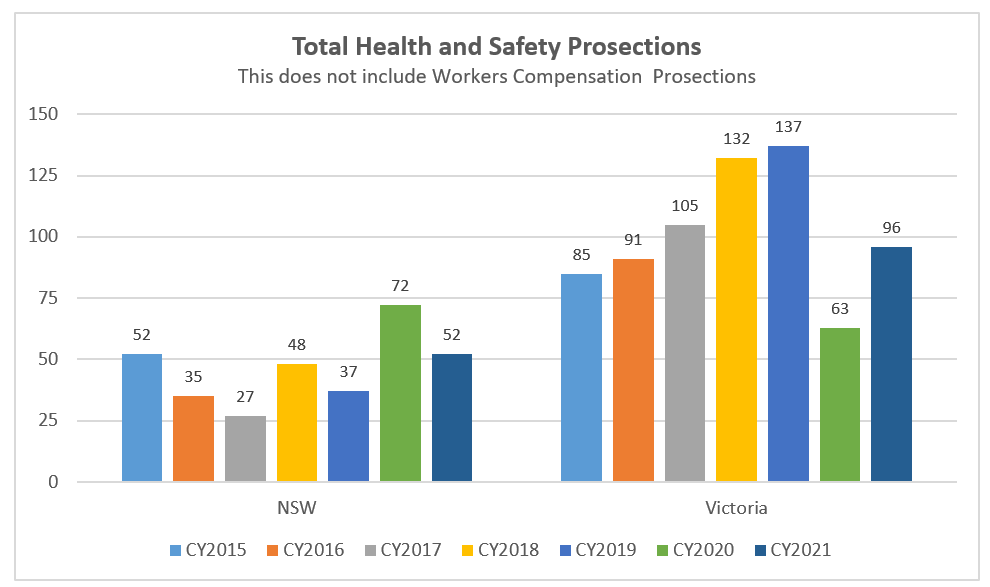 Unlike previous years, no prosecution involved the Occupational Health and Safety Regulations 2017 only. 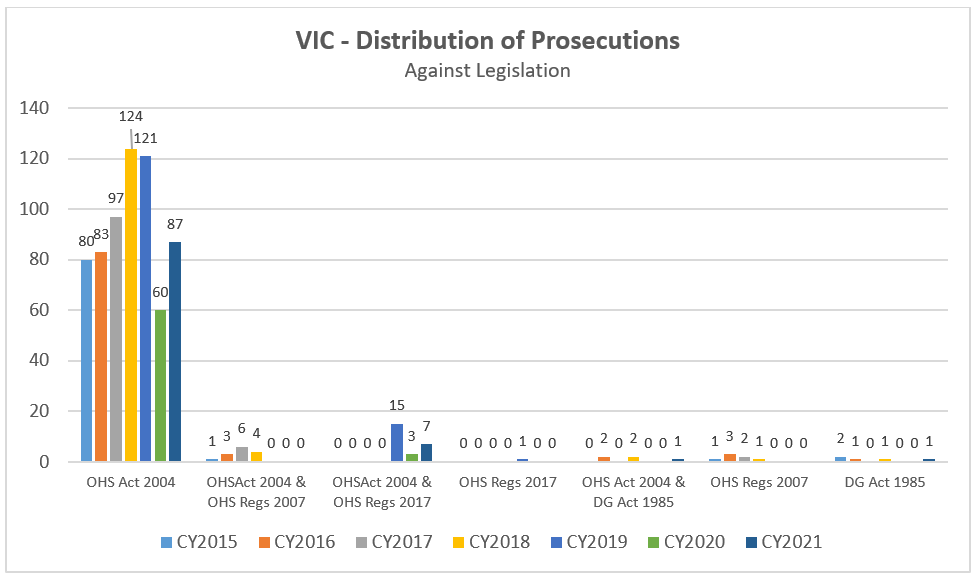 Zero prosecutions were against the 2007 version of the Occupational Health and Safety Regulations which were updated in 2017. 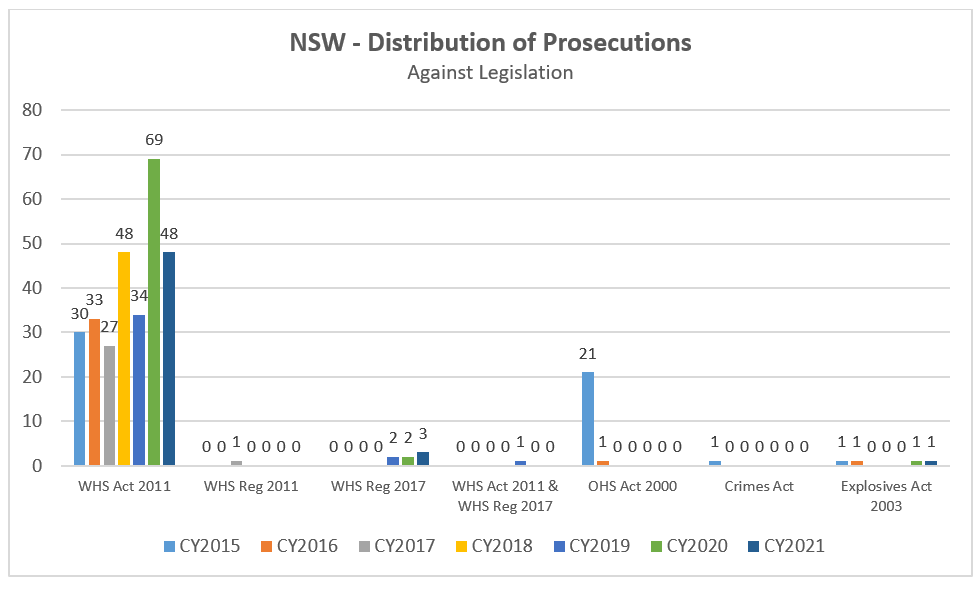 The table below lists the timeframe for the prosecution’s outcomes from 2021 when measured against the date of the offence. 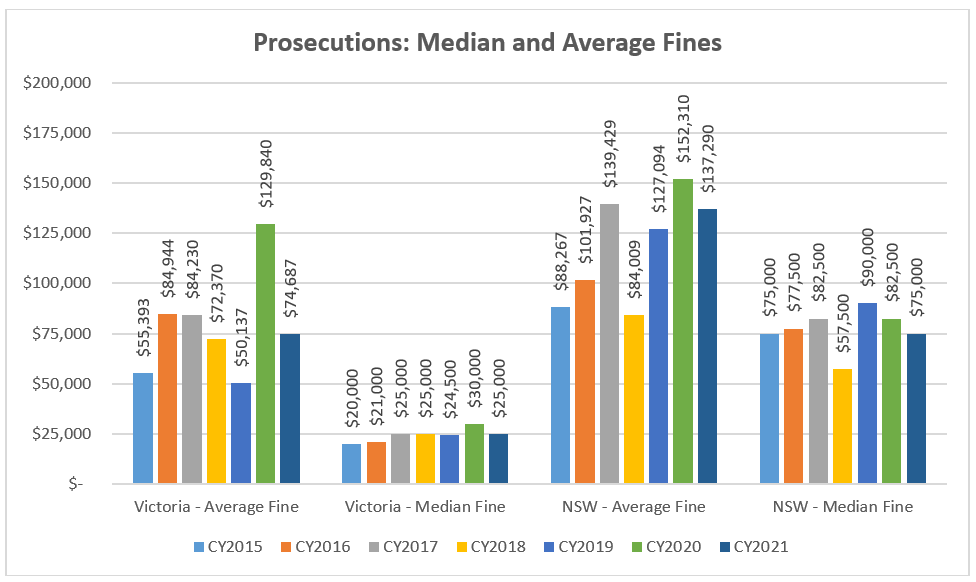 In NSW all but one prosecution resulted in a monetary fine. In the one prosecution that didn’t involve a fine, the Director was required to enter into a Work Health and Safety undertaking. The company was fined $75,000. 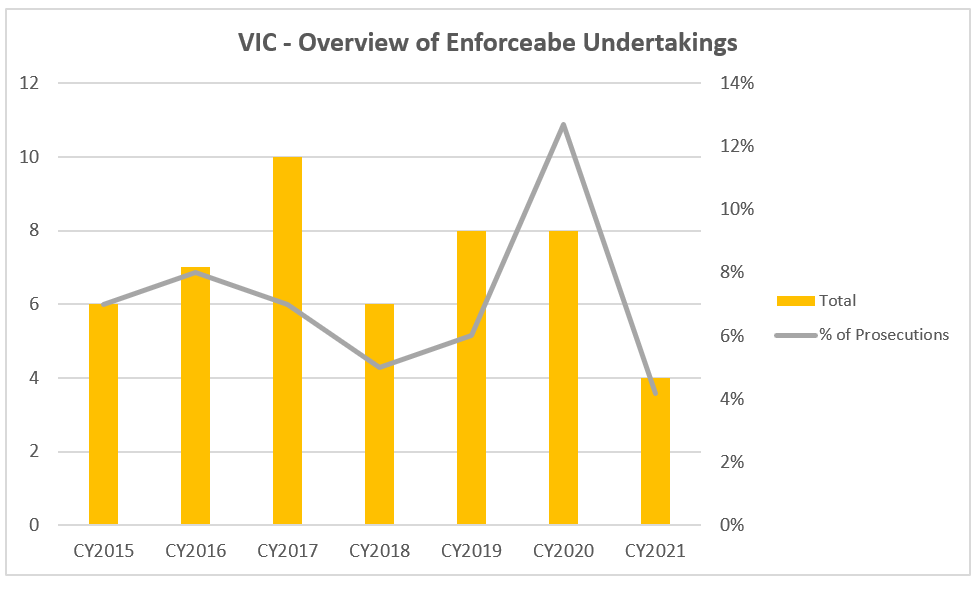 An ‘enforceable undertaking’  (EU) is a legally binding agreement between WorkSafe Victoria and the employer. The employer is obliged to carry out the specific activities outlined in the agreed undertaking. EUs will typically guide and direct the business being prosecuted to improve its health and safety program.

With respect to fines, the maximum fines for both Victoria and NSW decreased year on year. The fines issued in 2020 were the greatest in each jurisdiction since 2015. 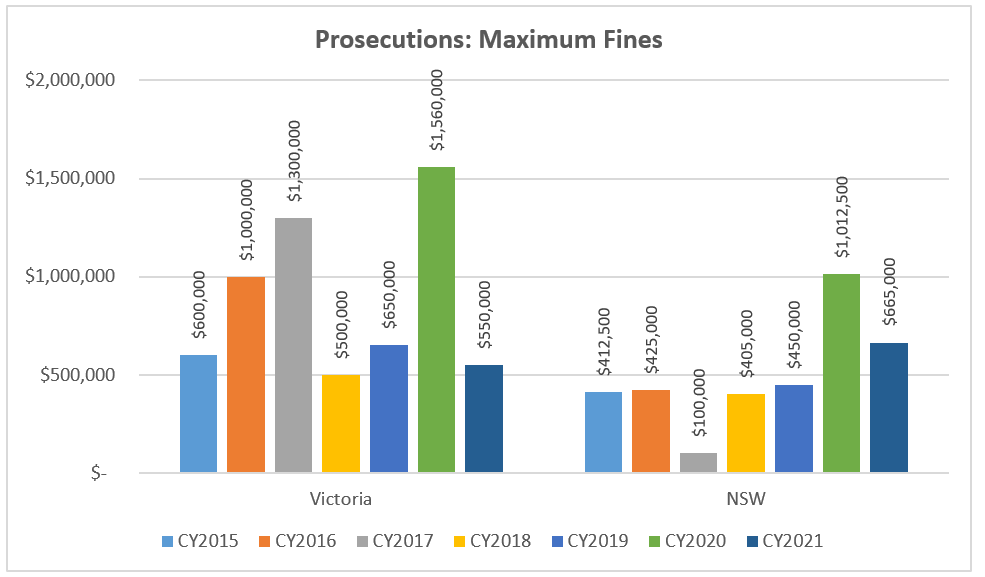 Victoria: The offender was a civil construction company based in Delacombe. In January 2018 the offender entered into a contract to construct a main trunk sewer system for a housing development. On 20 March 2018, a supervisor employed by the offender told the crew to get a manhole ready for a stub branch on the following day, while the supervisor continued working on manholes more than half a kilometre away. The terrain between the two locations was undulating. On 21 March 2018, a labourer and pipe layer, and 21 year-old labourer, employed by the offender, were instructed by the supervisor to work at the manhole more than half a kilometre from the supervisor. The two employees commenced the task, speaking with the supervisor on three occasions during the morning. At 10 am the supervisor and other employees met at the break room for smoko, however the two employees did not join them. At no point during the morning of 21 March 2018 did the supervisor either check how the work was being carried out or ensure that a manhole cage and/or a trench shield had been installed in the excavation before any high-risk work commenced.

If appropriate safety measures were not used, there was a risk that a trench or manhole pit could collapse while the offender’s employees were carrying out this high-risk work and could thereby be injured or killed. The offender failed to provide the supervision that was necessary to enable its employees to perform their work in a way that was safe and without risks to their health.

At approximately 11 am two subcontractors arrived at the manhole and saw that the manhole had collapsed. One employee of the offender was buried to the extent that only his head and one arm was showing. He communicated to the subcontractors to get him out of the trench. The other employee in the trench was not moving and was not responsive. Emergency Services was called, and the offender’s employees attempted to dig the two buried employees out using their hands, shovels and an excavator. When Emergency Services arrived one employee was extracted from the collapsed trench and taken to hospital, where he died from his injuries including metabolic derangement and multiple organ failure the following day. The other employee died from head injuries at the scene.

The offender pleaded guilty and was with conviction sentenced to pay a fine of $550,000.

In sentencing the Court took into consideration:

NSW: On 16 August 2017, a subcontractor sustained serious injuries when a masonry brick wall being constructed collapsed on to him while he was clearing the alfresco area of the Kellyville construction site. After a SafeWork NSW investigation, the defendant, was charged with a breach of section 32/19(1) of the Work Health and Safety Act 2011. The defendant was convicted by the District Court and on 21 May 2021 was fined $665,000. 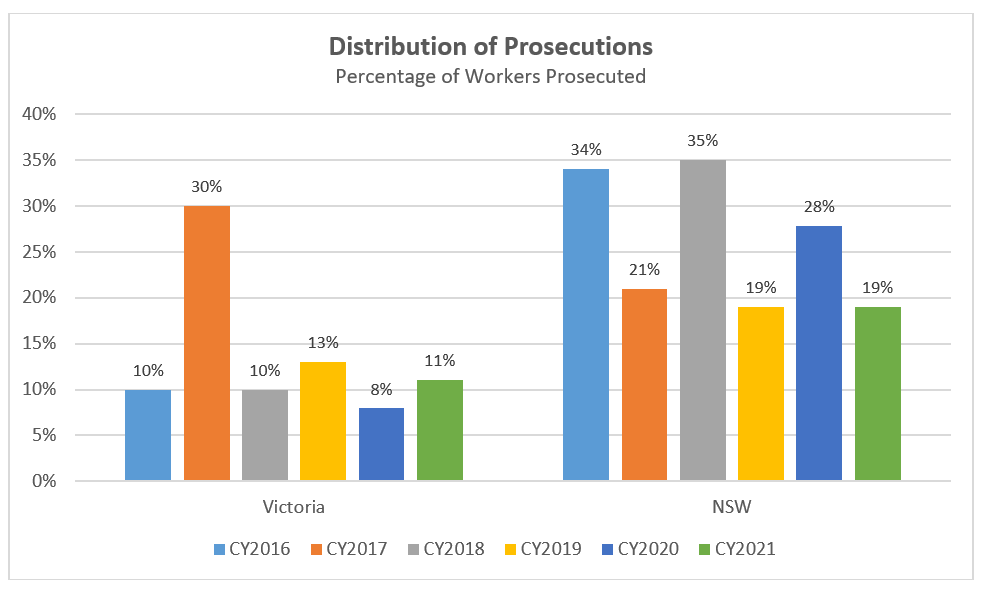 Prosecutions: What is the cause and where are the gaps?

With respect to the criteria/codes that lead to the prosecution – of the 55 criteria that were referenced, the top 12 criteria associated with prosecutions in 2021, as defined by WorkSafe Victoria, are outlined below. 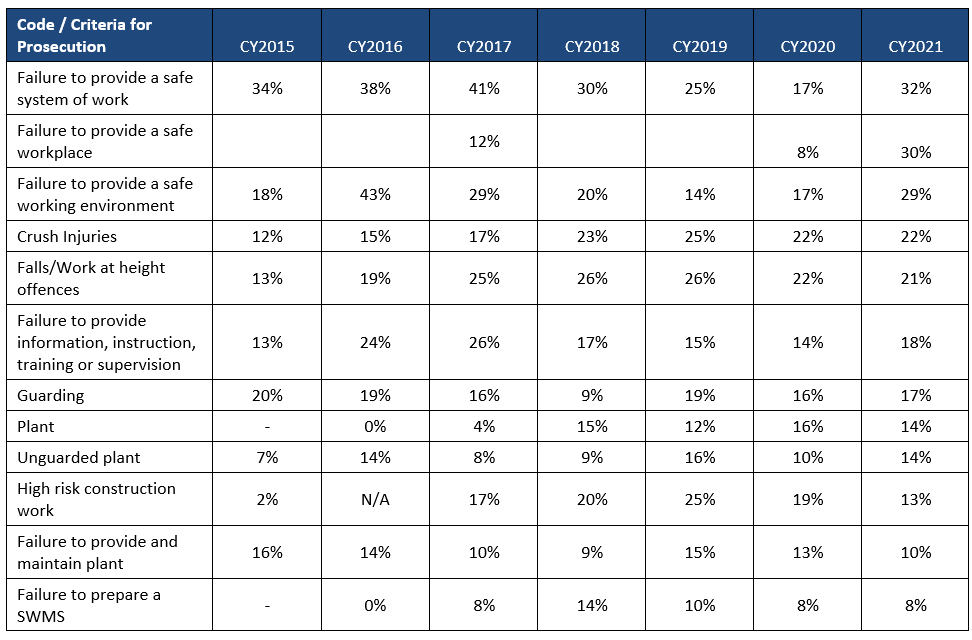 These criteria are relatively consistent since 2015.

‘Failure to provide a safe system of work’ continues to places a clear duty on all workplaces to understand their operations, the hazards associated with their work, and ensure that the established controls are implemented. 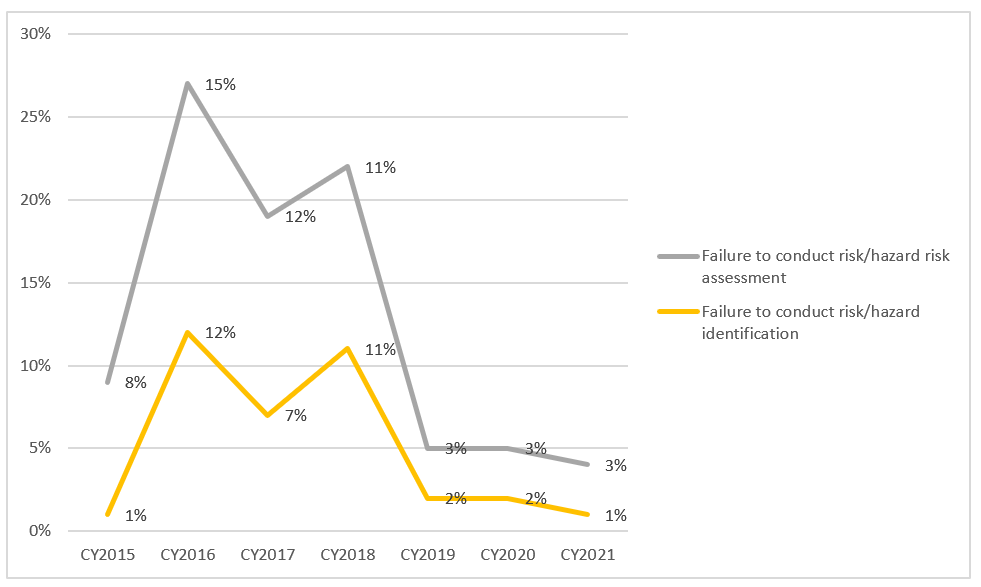 Action OHS Consulting, in collaboration with its sister-company Safety Champion Software, has developed a self-assessment tool: Safety Champion Impact Assessment. This tool has been designed to support businesses to understand potential points of failure, allowing them to proactively improve their health and safety program. You can access this tool for free up until 30 April 2022.

Action OHS Consulting developed and delivered a four-part webinar series providing direction on how businesses can best manage their legal obligations associated with health and safety.

The good news is that it is free for you to download.

To allow better and more informed decisions to be made, businesses must have established processes to understand how effectively their health and safety program has been implemented.

The Health and Safety Legislation adopts a self-regulated risk-based approach. This means businesses and their leaders are required to understand what could foreseeably go wrong within their operations, and then establish reasonably practicable controls to minimise the likelihood or severity of such events occurring. The intention; is to protect workers, contractors, customers and visitors from harm.

This requires leaders to be real. It requires them to appreciate that safety as documented by your policy and procedure manual, may not reflect work as completed operationally. Put simply, this leads to a requirement for workplaces to actively:

We would be interested to hear your thoughts, questions or concerns.